Return of the Nexus 4

The elusive Nexus 4 is finally back in stock in the Google Play Store in the US, Canada and Germany. What happened there then?

Google’s had a tough time keeping their flagship phone in stock. Their partner, LG has been blamed for the continued hiccups, confirmed in part by Google’s UK Managing Director, Dan Cobley who hinted at the suppliers’ ‘flawd’ communication and ‘scarce and erratic’ supplying patterns.

A week ago the co-founder of Google Larry Page promised that they were working on the supply chain issue. Good job too as demand for the smartphone is high; the general consensus being that the Nexus 4 is as good as it gets in the world of Android.

In addition to its clean and classy interface, the software seems to be its biggest draw; with the latest and best of Android technology: the Android 4.2 Jelly Bean. It includes an amazing 360-degree image-capturing Photo Sphere tool, a new quick-settings panel, native screensavers, lock screen widgets and lots of subtle polish to the platform. It’s just super fast and efficient too. However it should be mentioned that with the Android 4.2 some users have experienced occasional random reboots on their devices. But let’s be honest; that’s nothing to write home about, really. 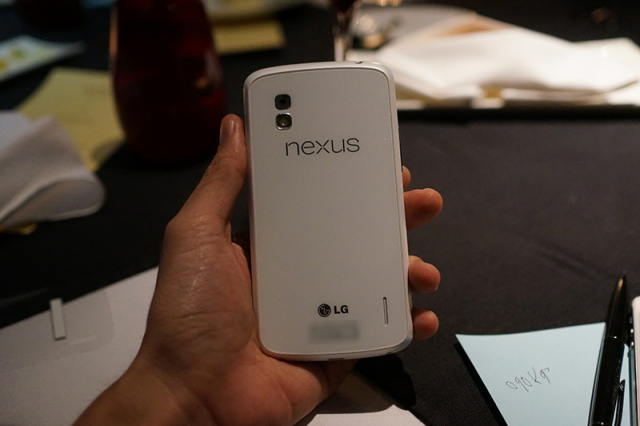 Despite the hiccups the phone seems to be going down a storm; and the wait is being taken by eager buyers as a tantalizing tease as opposed to a dog-eared delay. This might be the reason why there’s no bad blood between LG and Google - apparently the relationship between the two is ‘going smoothly’. Good job as we’re hoping this partnership lasts – we want to see more of their beautiful babies!

As if the return of the Nexus 4 wasn’t enough for you then how about the latest gossip: pics of a new, white version have been leaked on the internet – wooooow.

How sexy is that!? If you’re one of the luckies who are waiting for one of these puppies then don’t forget to "sell my phone" with us at OnRecycle. We’ll find you the best price – guaranteed! If you’re happy with our service then don’t forget to ‘like’ us on Facebook or follow us on Twitter. You’ll get all the latest from the world of technology then, too)