Sell Your GoPro Gadget For Cash 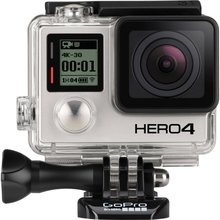 Up to - View All Prices

Looking to sell your GoPro? Don't waste time Googling "Where to sell my GoPro" – OnRecycle are your ultimate online destination to trade in your GoPro for cash! In just a few seconds, our handy system will compare all the best GoPro trade in prices and display them for you in an easy-to-read table, so you'll have all you need to sell your GoPro online with confidence.

What else makes OnRecycle a no-brainer when you're selling your GoPro? Well, not only do we pair with the world's top recyclers to bring you the best prices (with an incredibly easy-to-use system!) but we'll display the payment methods, payment speed and reviews, too – who knew selling a GoPro could be so simple? Thanks OnRecycle!

Founded by Nick Woodman in 2002, the GoPro brand is a name known the world over. The company are specialists in manufacturing and selling action cameras and the accessories that go with them. In 2012 - due to the value of the company - announcements were made that Nick Woodman was a billionaire.

Since the first GoPro device (the Hero wrist camera, for the curious!) was released in 2005, the brand has brought out 6 different types of camera, ranging from the original 'Hero' to the 'Hero 6', plus plenty of essential accessories. GoPro's line-up also boasts a 'Karma drone' which lets you record footage from a range of heights and locations with ease, thanks to the remote controlled operation that lets you fly it from the ground.

Whether you're looking to sell your GoPro so you can treat yourself to the latest upgrade or simply sell your old GoPro to clear some clutter, you’re in luck: OnRecycle are here to help with all of the above! We work with all the major gadget recyclers to find you the best trade in prices for GoPro, letting you upgrade without having to pay full price – or simply swap your GoPro for cash and enjoy the budget boost.

Alternatively, you might be wondering how you can get your hands on a GoPro camera for the cheapest possible price. Are your drawers home to a collection of old phones and tablets that you no longer use? If so, OnRecycle are - once more - here to help! We’ll find you the best prices for your devices (even if they’re no longer working), so that you can skip the hassle of shopping around. There is no catch: we act as the middle men, giving you direct access to the people who will give you cash for your GoPro, mobile phone or tablet - without taking a commission payment from you!

How Do I Sell My GoPro Through OnRecycle?

OnRecycle is designed with you in mind – which is why getting cash for your GoPro here is made so simple! To sell your GoPro with ease, all you have to do is type the details of your gadget into the search bar and choose the result that matches what you're selling.

Then you'll be transferred to another screen where we'll ask for the condition of your GoPro and its size in order to ensure we give you the most accurate GoPro trade in prices. Within just seconds, you’re shown the prices that potential buyers are willing to pay, helping you decide whether or not to sell your GoPro (we think you've earned the upgrade– treat yourself!).

At this stage, you're free to decide selling your GoPro is not what you want to do after all, thanks to our no-obligation policy. If it is, use our handy price comparison system to find the right buyer for you and you are then free to trade your GoPro for cash either directly through them, or through the OnRecycle payment system. That's all there is to it!

The GoPro is a stylish, portable camera capable of capturing some of the most memorable moments you ever have, with the features continually improving – so what are you waiting for? Trade in your old GoPro (or any unwanted gadgets!) for the best price through OnRecycle, and you could be in the process of getting your hands on the latest one today!

Why Is The GoPro So Popular?

The GoPro has become a must-have gadget for camera enthusiasts all around the world. The camera was (and continues to be) designed for use on-the-go and this has enabled it to capture some stunning action shots. The camera is both waterproof and shock-proof, making it extremely durable. The GoPro cameras have been used in many different contexts, and there are - no doubt - many more that have not yet been thought up.

It's the flexibility of the GoPro that makes it so unique; the capabilities and types of scenarios in which it can be used are only limited to what you can imagine, and sometimes it goes beyond even that. For example: while travelling, a user had his GoPro camera stolen by a grizzly bear! The bear took the camera away and operated it before the traveller finally managed to retrieve it. Everything was recorded, and the footage produced some very interesting results.

Other GoPro lovers have used their camera at weddings and even to film skiing and snorkelling activities, recording underwater shots and videos at the push of a button. Some football teams use the GoPro camera to capture footage, and after teaming up with Periscope, live footage can be found at some games. Due to the camera's durability, it can be placed in 'burst mode' and thrown up in the air, recording footage on its way down.

The camera is Wi-Fi enabled, which means that photos and videos can be instantly transferred via social media and email. Alternatively, GoPro has its own channel, enabling users to upload their videos and compete for the 'video of the day.' Alongside this is the 'GoPro Studio' editing software and GoPro app which make the low light and time lapse features easy to use.

Coupling its ease of use with its high-quality camera, the GoPro is appealing for a wide range of users. From experts to beginners (or even grizzly bears!), the GoPro is a highly accessible choice that boasts a straightforward user experience. The range of prices also makes the GoPro affordable and appealing to a variety of budgets, depending on the age of the model.

OnRecycle understand how it must feel to be left behind with an old GoPro camera, and we also understand that unused gadgets (such as the GoPro itself) can needlessly collect dust whilst they are still valuable. Why not take a look at the trade in prices for GoPro found on OnRecycle, and cash in on its value while you still have the chance?